2nd year in a row means it’s a Tradition, right?

Here are the 2014 predictions from last january. I’m still working on a review of those, which came true, which don’t.

Well, here are the Predictions of my fellow 3dP friends as requested on G+

2014 went by in a flash and here we are guessing at what 2015 will bring in 3D printing land. I’m not a huge fan of the guessing because life and the universe is renown for throwing curve balls. That said, Nils asked, and he’s a pal so my personal prediction for big growth in 3D printing next year is around licensing. 2014 has seen a number of big names dipping their toes in the water with licensing their brands for 3D printed products on demand. I think the toe-dipping will snowball throughout 2015 and more and more big brands will identify the immediate marketing potential and future revenue streams. Likely supplied via 3rd party services with IP protection software in the short and medium term, there will be much scaling up by many 3D printing ecosystem companies required.

Adrien Bowyer, the Inventor of the RepRap

There will be more 3D printers with multiple functional materials. Printing electrics, especially, will take off .

Wrote down his predictions as BulletPoint list and All3DP.com posted it

Wrote his predictions down on his Blog – 2015 Predictions for the exciting home, consumer and business 3D printing eco-system

You should really take the time to read those, Rich gave em a lot of thoughts and he knows what he’s talking about.

Hmm, trying to list the things that I think will happen and not just what I plan to make happen… and speaking for myself, not for Deezmaker…

I think this is the year ARM-based electronics (mostly Smoothie-compatible) will finally start to become popular in the open source community. I’m not talking about proprietary implementations, though I expect ARM to have an even bigger share of that market, and I would be surprised to see any new printers using proprietary firmware that aren’t ARM-based.

The race to the bottom on filament price will continue. Like Richrap, I think there will be push-back against bad filament from those of us who are in the know, but I think that there will still be enough people whose price-consciousness outstrips their quality-consciousness to keep the crap filament sellers in business.

Composites and ‚filled‘ plastics are hot right now, and I expect that trend to continue, with more variations being introduced. I think we’ll see nozzle abrasion from running metal particles through tiny holes made of soft brass, but these filaments will remain expensive enough that for a while, most of the people who use it enough to see the effects will be ones who won’t mind swapping in new nozzles on a regular basis. Longer-term, we’ll want all-stainless nozzles for these materials.

I don’t expect to be impressed by any improvements in speed or resolution of FMD/FFF printing. We’re pretty much at the limits of what’s practical (note, I didn’t say possible) with this process, though I do expect to see more increases in the quality of prints aside from resolution in a few printers from better mechanical smoothness in cartesian and extrusion systems. Any machines in that category that use platform compensation to achieve that will do so by using a raft or some other modification of the bottom layers only, so that the rest of the print can be printed in the machines native coordinate system and not a skewed one. Meanwhile, kickstarter continues to see more campaigns for race-to-the-bottom printers. More and more of those campaigns will go unfunded, but at least a few that shouldn’t make it through still will.

More companies will attempt a „just click to print“ model, but not half as many as will claim to have achieved it without actually making any significant steps toward achieving it. Those that get closest will do so by increasing the repeatability of their manufacturing to make more consistent machines, tuning the hell out of their slicing settings for those machines, then making most of those settings harder for users to mess with (you know, what Makerbot tried and failed miserably to do).

Speaking of slicing, it’s gotten some big improvements in a lot of areas, notably including support and rafts. I’d like to see new and better soluble materials as much as the next guy, but I expect single-material supports to get good enough that fewer people will see them as necessary, given some of the inherent difficulties introduced by using multiple extruders.

We’ve recently (finally) seen a couple of announcements of extruders with a second gear driven by the primary drive gear to grip and push the filament from both sides, and I think these will become common going forward. By the end of the year, I expect one of these designs (likely Printrbot’s, though I hope it’s a better version) to be duplicated for a lower price by Chinese cloners.

We’ll see advancements in powder- and resin-based printers, but none of the processes that are well known now will unseat FDM/FFF as the most accessible printing technology. New hybrid processes will continue to pop up that combine existing techniques with each other and with new twists, such as selective resin deposition, and powder fusion using a big, indiscriminate heat source after selectively sensitizing or inhibiting the material. Some new technique (which will be raster-based, not vector like FDM/FFF) from this „miscellaneous“ category will eventually replace FDM/FFF as the new leader. We may well see this new champion of printing processes in 2015, but I don’t think we’ll recognize it as such before the year is out.

I could probably go on, but I think that’s enough for now. Some of those are pretty safe, while others are more speculative, but I think it’s a good mix. Personally, I want to focus on development of standards to create the proverbial rising tide that lifts all of our boats.

John gave me a link to QUOTEAs a joke, here are some predictions I made about what will be 3D printed in 2015 QUOTE END:

And here is his set of predictions on 3LDT

Prices for 3D printers continue to drop. Rate of adoption continues to increase. Trivial I would say. I expect the scanner market to technically mature quite soon (as in, working as it should).

Next, or partly because of this, I expect a lot more adoption of consumer brands in using 3D printing as a viable alternative to their small / medium series of production.

On top of this, a lot more high quality content will become available (maybe through those consumer brands), especially for users outside the Maker scene. To me this will be one of the most important developments, as the result will be a substantial amount of money flowing into 3D printing accelerating developments even further.

We will start seeing serious C2B models popping up this year. As far as I know this is unique to the 3D printing, where individuals offer professional services to businesses on a large scale.

I personally do not expect a real breakthrough for filament recyclers this year yet. Obviously a growing trend in usage can be expected but larger scale adoption I don’t see happening this year just yet. 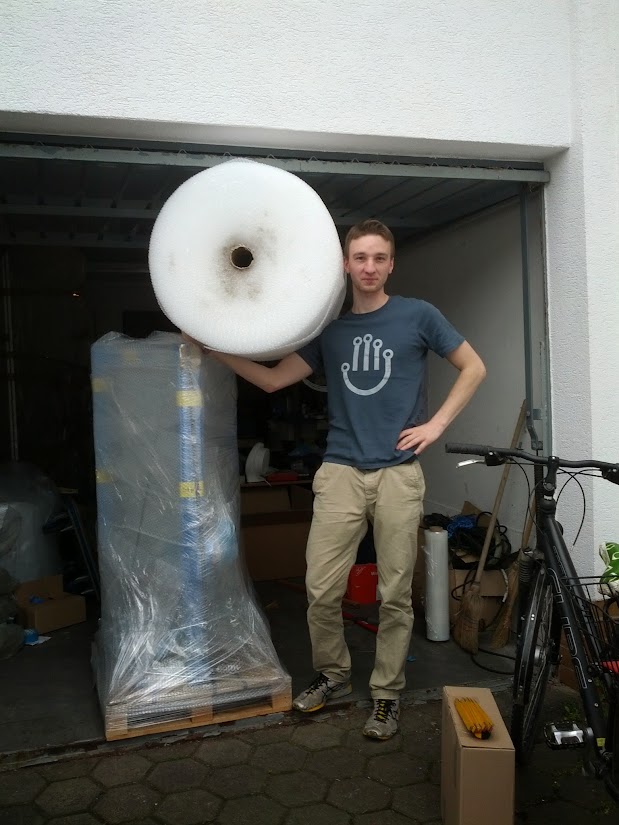 Better late than never: Because my predictions from last year were a bit ahead of the times I try to calm down myself a bit. In general: I much more enjoy to read the predictions of all those lovely people Nils asked to provide input, instead of playing the oracle myself :-D

Here we go: Looking at FDM printers in 2015 we will see more and more mass-produced machines (by Asian OEMs, like AIO Robotics‘ Zeus, XYZ, Up!, etc.), but also continuous development of highly specialised builds from European and US companies. On the other hand: Smaller players without a unique feature, broad reselling network or strong B2B customer base can’t compete anymore with the mass of readily available printers.

Personally I’m looking forward to see how SLS-related projects (like Sintratec) and the whole Autodesk universe around the Spark platform will perform in 2015.

Looking at completely new 3d-printing techniques I feel very bullish on everything based on the precise dosing of liquids and pastes. There’s a new world of materials and applications to be discovered.

On the business front there will be an even stronger demand for deep 3DP know-how, because companies (everything from startup to large scale enterprise) rarely know enough about the technology to meet their ambitious research/project goals. And again: Only top-notch material science plus custom-tailored software solutions will enable the coolest 3DP projects.